Krav Maga –
The Self-defence Method
Developed by the Israeli Army 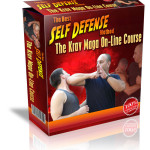 Studies have shown that creative visualisation improves athletes’ performance. Likewise, in self-defence, visualising the moves will prepare you for a real fight and increase your self-confidence.

Krav Maga is the self-defence method that was developed by the Israeli army. It enables you to overcome an attacker and neutralise violence in a matter of seconds. It isn’t a traditional martial art because its sole purpose is self-defence, not the practice of a tradition.
The Krav Maga On-Line Course consists of video movies, mp3 files and an e-book.

Each video begins with a slide describing the moves. Each video comes both in regular and slow motion, with vocal explanation in the background that explains what you should do – making it easy to learn.

The e-book gives step-by-step explanations, accompanied by pictures that beautifully capture and demonstrate each and every move. The e-book, and its pictures, are a step-by-step guide to the exact moves that appear in the video movies. Mp3 files provide the vocal explanation for each. You can listen to the them while reading the e-book – or whilst driving in your car.

All the defences incorporate counter-attacks .

This on-line course is relatively inexpensive, even more so when you consider the huge value you will get in return.

Thank you for reading

This is an extremely intense course that will make you walk confidently on the street. Take a look here. You won’t be disappointed:

"Tim Milne Presents ... Think and Grow Rich"
Get this book from Amazon Now!

Your cart is empty.